Susan grew up in a large family. Though loving, her family’s structure was a bit scattered, with no real foundation. When Susan became an adult with children of her own, she realized the legacy she was creating with her current family was the same one she grew up with, and she had no idea how to change it.

It wasn’t until her two-year-old granddaughter walked out with Susan’s oversized high heels on, proudly exclaiming to the world, “I am Grandma!” that Susan reached a conclusion. If she was going to change the direction of her family legacy, the time was now.

Susan began the long journey down a difficult road of self-discovery. Ultimately, she learned that although she couldn’t change the past, she could create with her family new healthy ways of being in the present, giving her a new path for her family legacy.

The image of Susan’s granddaughter in her oversized high heels never left her. Along with Susan’s newfound knowledge, it inspired her to write a children’s picture book about a child’s adventure into the lives of his family by wearing their shoes.

Susan lives with her family and two cats, Leo and Arlo, in Northern California. 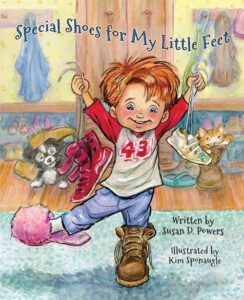 Special Shoes
for My Little Feet

Available wherever books are sold